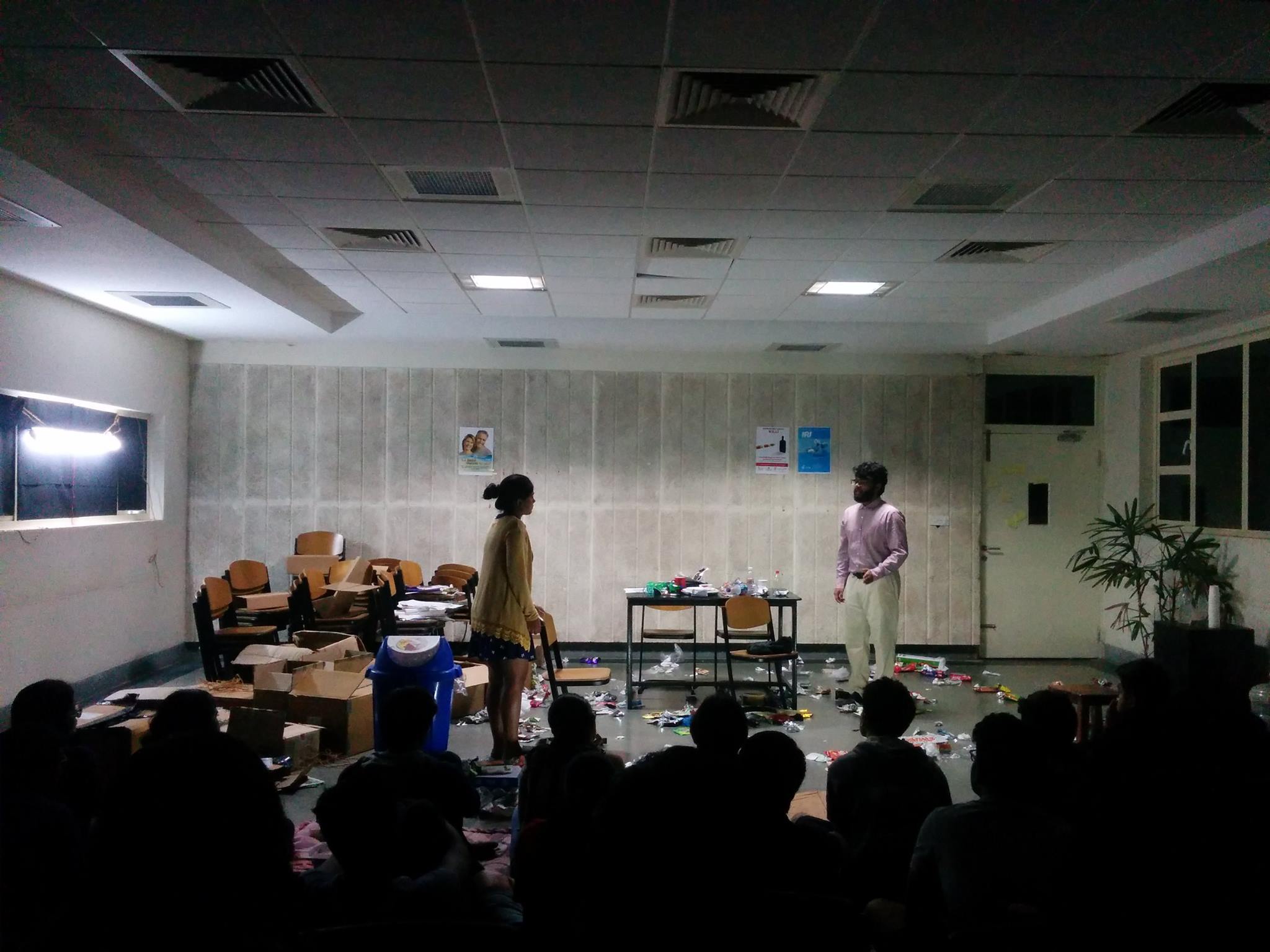 Blackbird begins in darkness. And with masterful tact, teases the greys out of a world that is so often reduced to black and white. They’re not all pleasant, these greys - there is the worn grey of age, and the wretched grey of torn hair, and that unshakeable shadowy grey of social stigma. There’s even the reddish tint of shattered innocence, the smoky haze of ill-understood romance, and the dusty curtain of attempts to forget - all against a starkly tube-lit office space.

Adheep Das is Ray, and Shilpa Raju is Una, and together they manipulate the room’s sympathies with their verbal crossfire. Das brings out the self-righteous spectre in every sinner - why must he be reminded repeatedly of what he has already paid his dues for? Leave him be, leave us all be, the past is gone, mistakes were made, c’est la vie. Raju’s unrelenting Una provides a breathless audience with exposition - some mistakes are not like others.

Like any great tale, this one soon unleashes the scent of romance, but the reek here is unusual - one sniffs early on at hints of inappropriateness, and Una finally does let rip. He had been forty, and she just twelve, and he had taken that which she could offer but once. What follows is Ray’s impassioned defence of a love that was true and complete in and of itself, yet crippled by its existence in a time that was unfit for it. Una is proportionately incensed, and Raju’s breakdowns shatter any illusion of love being a victimless crime. The distraught viewer struggles to take sides - is a forty-year old’s romanticisation of romance excuse enough for a lost childhood, a mind forever mangled, and that dirty, dirty word for excessive child-love - paedophilia?

Blackbird is dark, unfiltered, and questions the fundamentals. Is it worth fighting for something that nobody understands? Das’s fumbling, both physical and verbal, thaw those who would turn away in disgust - there is emotion here, ill-articulated, hard to swallow, but true. Raju flings herself at the world around her with the fury of a girl denied justice, which indeed she is. Her howls come straight out a rent in her heart, a void that was filled once, long ago, by a man ill-suited, if only in age, to the task. Haloi directs both actors to interact with the labyrinthine space of the set - in sitting, standing, pacing, lunging, even taking a drink of water, they communicate a great deal, even in their silences. Das, gazing down at his feet, a man unsure of the punishment he deserves, more so of his sin in the first place; Raju, charging accusatively at everything around her, ever in search for an object on which to direct her confusing cocktail of loneliness, rage and lust.

The set is disgusting, yet sanitised - raw white light, sparse furniture, and garbage everywhere - a subversion of the mindless cubicle. It informs of a filth that is to be taken as filth simply because it has been taken as such since the beginning of time. Clearly, it does one good to let others do the thinking, clearly, it simplifies things, makes them easier to compartmentalise, to judge right from wrong.

Blackbird ends, fittingly, in darkness. Here is that last grey - some questions have no answer.

Reviewed for DoJMA (the Department of Journalism and Media Affairs), BITS Goa